M.I Versus Vector: How One Of The Biggest Lyrical Wars In Africa Ended 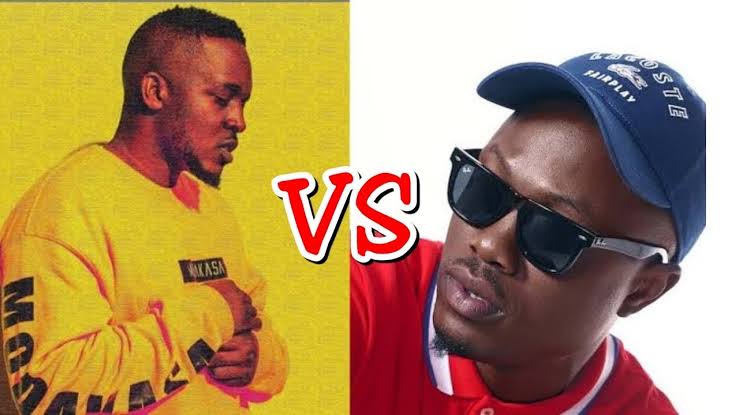 M.I versus Vector was one of those lyrical battles that became personal conflicts and lingered from one decade to another.

Rap music is one of the most popular music genre around the world. It is quite interesting to note that the origin of rap music is rooted in black culture and history. Rap music, from its birth, has always been regarded as revolutionary. Rap music is not all about loquacity on a beat or tone of music, it is often described like a poetry where literary ingredients like wordplays, puns, metaphors and, even, ambiguities define quality.

In recent years we have witnessed many African musicians doing rap music. First, it started with African rap musicians trying to be true to the African-American origin of rap while they practiced theirs. In doing so, the first wave of African rappers practiced the art solely in English language, with American hip hop beats, and without real concerns for their immediate context. Later, rap in Africa took a context-based revolution. This shift saw to an influx of artistes who told their story, in their language and in their cultural sounds.

African rappers telling their stories and how they feel about the issues happening around them in rap lyrics gave birth to conscious rap and diss rap in Africa. Since the start of this millennium, African music space has given stage to many ‘angry’ rappers from the streets of Johannesburg to those of Lagos, Accra, Freetown and all over Africa. It is either a fight against the government and social injustice or a war against themselves. These lyrical wars between rappers is what is popularly known as rap diss.

Diss is one of the aspects of rap where two rappers square off against each other in a battle of lyrics, troll or say hurtful things to each other in a rhythmic fashion and the audience decides who wins by the quality of their delivery and how well they could play with words. This could either happen on stage, which is known as rap freestyle battle, or in a recorded rap song. Africa has witnessed a lot of this lyrical wars and most of them were not mere battles for the best delivery; they were personal conflicts.

M.I versus Vector was one of those lyrical battles that became personal conflicts and lingered from one decade to another. Anyone who is conversant with Nigerian music industry would agree that there has never been a lyrical conflict around as tensed as what transpired between Jude Abaga, aka M.I, and Olanrewaju Ogunmefun, aka Vector tha Viper.

HOW DID THIS WHOLE SAGA START?

This bitterness between these two Nigerian hip hop heads which lasted for 11 years (2009-2020) was enkindled by a line used by Vector in his 2009 song titled ‘Kilode’. The controversial line went thus: “Kilode? What the heck do u want from me? Asking if I could kill M.I.
Why would I? He’s a cool kid.”

That line in the lyrics of ‘Kilode’ is the genesis of one of the biggest storm that ever happened in the Nigerian music industry. Rap disses are interesting, especially when it involves two outstanding players in the game with huge fan bases. Unlike many other Rappers in the African scene, M.I and Vector are educationally sound artistes: while M.I majored in business and economics (while a member of poetry group) at Calvin University, Michigan, Vector is a graduate of Philosophy from the University of Lagos.

The battle became more serious than just lyrics when both got signed by two competing cognac brands to headline their hip hop cyphers. While Vector got signed by Hennessey as the frontline artiste for Hennessey Artistry, M.I got a contract with Martell to head its rap cyphers.

Prior to these cognac endorsements, in 2015, Vector had won Lyricist On The Roll category of the Headies Award, a category M.I was also nominated for. This seemed not to go down well with M.I and he took a shot at Vector and the award organizers in his track titled ‘Not Just Okay/Savage’. In the track, M.I said the following;
To the headies wassup wassup
You my fam though, I wish you the best of luck
You’ve been a blessing to the game to lots of us
But that lyricist award mehn we got to talk
Not tryna say I deserve to play
Cause I f*ck with everyone who emerged in that
The criteria of the win it doesn’t favor the men
Spitting new raw shit that’s word and facts.

The bad blood between these two took another twist after the cognac endorsements. It transcended into a clique war in 2019. The cognac cyphers headlined by these two became an avenue for group wars. While M.I and his crew dissed Vector in their cyphers, Vector and his crew dissed M.I in theirs. In one of the Martell cyphers, M.I threatened to beat up vector and invited him to a boxing duel. Vector bluffed in a reply, in another cypher, that he was bred in the barracks and getting a gun is not a big deal for him.
M.I didn’t just stop at lyrical shots, he took to DMs on Instagram. Vector had to share the screenshot of the DMs M.I sent him.

HOW DID THE M.I VERSUS VECTOR SAGA END?

2020 is surely a year of surprises, and it doesn’t seem to be ending soon, as long time enemies, M.I versus Vector beef has been squashed and they have finally settled their differences.

This was made possible by Hennessey Nigeria. In August 2020, Hennessey Nigeria announced the premier of a show titled The Conversation by Hennessey. The show contained three episodes of conversations amongst many concerned parties regarding the rivalry between M.I and Vector. In the final part of this episode which was published on YouTube on October 6, 2020, M.I and Vector were made to have one-on-one discussion in one room.
The finale of The Conversation by Hennessey saw to both parties explaining their lyrical utterances and both apologizing for any part of their actions that might have been misconceived.
We might be getting close to the release of the rap collaboration of the century in the Nigerian music industry.