Mum Of Three, Gets Her Children To Earn Monthly Allowance By Applying For Household Job 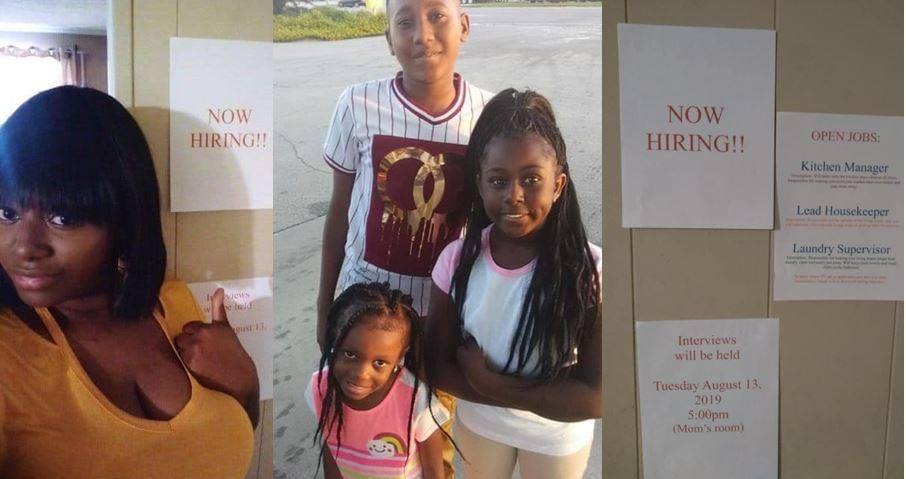 Tired of her three children nagging and demanding for allowances, mother of three teaches her entitled kids about working for and earning money by creating household job vacancies, makes them apply for available positions in order to work and earn their allowances.

Shaketha Marion McGregor shared the hilarious but amazing post on her Facebook page and many other parents are commending the move.

The super Mum, narrates how she created household jobs and made her children to apply to get allowance monies. Shaketha who decided to teach her children an important lesson about money, explained that she had decided to stop giving her them their allowance whenever they nagged her for it, and instead teach them that money is earned.

As her children kept making demands for phones and tours, she told them of a surprise and an approval of their request and then dropped the bomb on them? She opened up vacancies for several jobs as laundry supervisor, house keeper, kitchen manager so they can earn the money for their wants.

The Hilarious mum also held interviews for the Job positions and made sure her children went through a replica of a formal recruitment process. She has since created a Facebook page to document her children’s work progress and show that she really means business.

Shaketha recently posted about her daughter’s thoughts on her job and life;

I swear my 6yr old daughter has been here before!!! Yesterday when she and my 10yr old daughter were still having their pretend brunch they continued to talk about “life”. So my 6yr old asked her sister:
Serinity: So Keia, what else has been going on girl?”
Keia: Nothing really girl. Just tired of this job and stuff like that. About to break up with my boyfriend too.
Y’all my 6yr old took a sip of her hot chocolate and with a straight face this girl said “I feel you girl. You know every woman has a breaking point”
???????? I’m so done!!!

Shaketha and her children make a beautiful family and she has a beautiful parenting skill. It would make a huge difference if children learn about earning early in life.

What do you think about this? What jobs would you make available for your children?