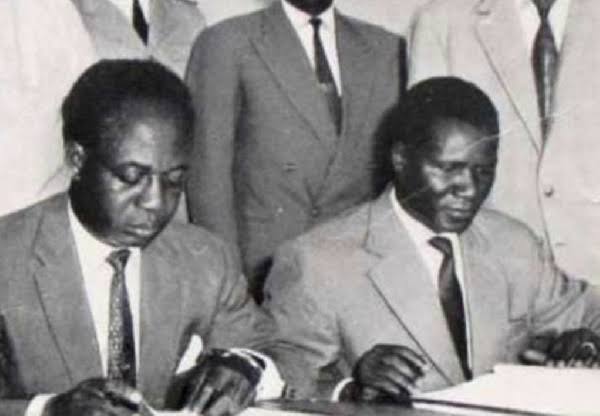 There was a time in Africa’s political history when a country, had two Presidents, and one of the President was from another country. The tenure of Sekou Toure and Kwame Nkrumah.

President Sékou Touré, whose full name was Ahmed sékou Touré born January 9th, 1922, in faranah, French Guinea(now Guinea) died on March 26, 1984, in Cleveland, Ohio, U.S, is and was the first president of the Republic of Guinea (1958-1984). He is also known as a leading African politician even after his death.

Although Touré was born into a poor family, he claimed that he was a grandson to Samory; a military leader who had resisted the French rule in the 19th century, even after many African nations had given up.  As a son of a very devoted Muslim family, Touré attended a French technical school at Conakry; where he was however expelled from after a year, for leading a food riot in the year 1936.

In 1940, Touré was hired as a clerk by Niger Français, a business firm, and in 1941, he took an administrative assignment in the postal office. He had a very strong interest in the labour movement, where he successfully organized and lead a strike that lasted for 76 days in the then French West Africa.

Touré became fully active in politics in the mid-1940s, and by the year 1946, he helped Fèlix Houphouët- Boigny of Côte d’Ivoire (ivory coast) form the African Democratic Rally. He was also a very strong orator and was therefore elected into the French National Assembly in 1951 as a representative from Guinea. However, Touré was unfortunately denied his seat, but he was again reelected in 1954 and was also not allowed to take his seat.  In 1955, the majority of the people had once again voted for him as the mayor of Conakry; then he was finally allowed to take his place in the National Assembly the following year. By the end of 1957, Sékou Touré became the vice president of the Executive Council of Guinea.

A supporter of Kwame Nkuruma

Touré was an ardent supporter of Ghana’s president Kwame Nkrumah and his program for African political Unity. A union of both nations was later proclaimed in the year 1958 but was never effective. When Nkrumah was deposed in 1966, Touré granted him asylum and made him a co-president.

In 1971, Touré began to impose severe restrictions on opposition forces in his country. He was subsequently reelected into position without opposition. He was known to have ruled with an iron hand, while others call him a tyrant.

Despite his tough political rule, Touré was seen by International politics as a “moderate Islamic leader”.

He also led a delegation in the year 1982, sent by the Islamic Conference Organization to mediate in the war between Iraq and Iran. He was also a great member of the OAU.

Toure was said to have died of a heart attack while undergoing cardiac treatment at the Cleveland Clinic in Cleveland, Ohio; for emergency heart surgery on March 26 1984.

Kwame Nkrumah was born on the 21st of September 1909, in Nhroful, Gold coast(now Ghana). His father did not live with his family as he worked in Half Assini where he pursued his goldsmith business until his death. He was raised by his mother and extended relatives.

His father, Opanyin Kofi Nwiana Ngolomah, was from Nkroful, an Akan tribe of Asona clan. He was a very respected man, known for his wise counsel and advice on traditional issues and domestic affairs.

As a young boy, Nkrumah lived a very carefree childhood, he was mostly seen in the village, in the bushes and on the nearby sea.

Kwame who was the only child of his mother was sent to the elementary school, run by a Catholic mission at Half Assini. He was a very exceptional student. His mother had stated that he was born in 1912, Nkrumah wrote that he was born on September 21 1909.

Nkrumah was an activist student, organizing a group of expatriate African students in Pennsylvania; and building it in to the African student association of America and Canada as he was its President.

Nkrumah also played a very major role in the pan African Conference held in New York in 1944; which urged the United States to ensure Africa’s development and freedom at the end of the second world war.

Marxist C.L.R  James, Nkrumah’s teacher, in a letter in 1945, wrote to George Padmore, a Trinidad born in London introduced Nkrumah as; “This young man is coming to you. He is not very bright but do what you can for him because he’s determined to throw Europeans out of Africa.”

After twelve years abroad pursuing higher education and organizing with other diaspora pan-Africanists; Nkrumah returned to the gold coast to begin his political career. He formed the convention people’s party, which became a huge success.

He became prime minister in 1952 and retained the position at the declaration of Ghana’s independence from Britain in 1957. In 1960, Ghanaians drew a new Constitution, making Nkrumah its first president.

However, Kwame Nkrumah was deposed in 1966 by the National Liberation Council, which was taken over by the armed forces and the police; due to some claimed dissatisfaction with his government. He later fled to Guinea where he was offered Asylum and was given the honorary title of co-president.

Nkrumah is also known for most of his published books;

Kwame Nkrumah was Diagnosed with prostate cancer in August 1971 and died on the 27th of April 1972.

From both profiles, it is seen that both have one thing in common and that is the development and freedom of the African nations. Both consistently spoke against the colonial era and the need for Africans to unite and gain their freedom.