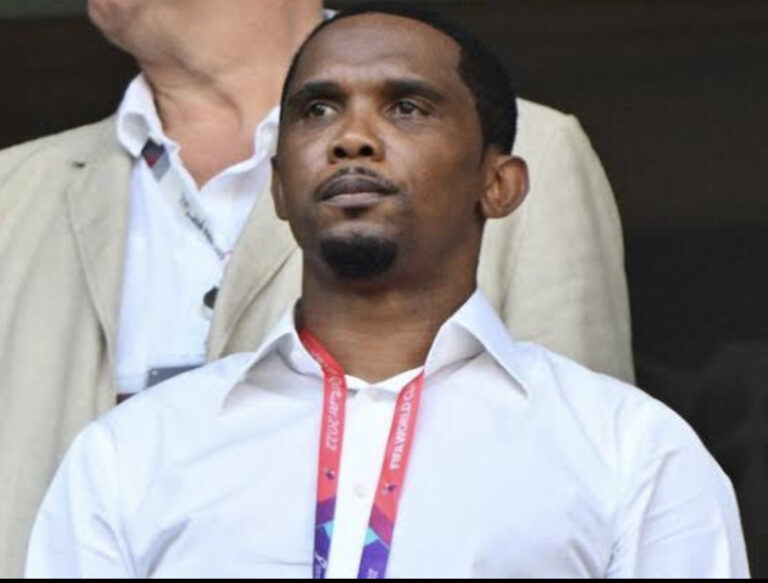 On Tuesday, a video of ex-Cameroonian soccer player Samuel Eto’o punching an Algerian YouTuber in the face went viral on social media.

The images show the current president of the Cameroonian Football Federation dryly hit in the face a cameraman, falling backwards, identified as Sadouni on YouTube.

Eto’o was encircled by a number of individuals who tried to hold him but were unsuccessful.

At the conclusion of Monday night’s 1/8 final between Brazil and South Korea (4-1), the scene occurs at the 974 stadium, the one with the containers that can be seen in pictures. Yellow-clad supporters of Brazil are also visible.

At the beginning of the 57 seconds video, Eto’o, in a blue cap, grants selfies to fans before being challenged by the YouTuber, whose question is not distinguishable, but we hear clearly pronounced: “Gassama! Gassama!”

The man with the camera refers to the Gambian referee Bakary Gassama, who officiated during the return playoff Algeria-Cameroon (1-2 a.p.), which qualified the “Indomitable Lions” for this World Cup at the expense of the “Greens”.

After the elimination, many rumours in Algeria suspected that the referee had been bought.

“I did all this for Algeria,” Sadouni SM only explained Tuesday in a video-facing camera.

“I am at the police station for the investigation. It is necessary to share this video, as Eto’o is a personality I am afraid they will cover up the case, but I trust the Qatari police,” continued the YouTuber in this video.

Eto’o “destroyed my camera and my microphone, he hit me there (showing his chin, Editor’s note),” he said.

An official of the Fécafoot told AFP Tuesday morning that the latter did not wish to react.

Samuel Eto’o is also the ambassador of the organizing committee of the Qatari World Cup.