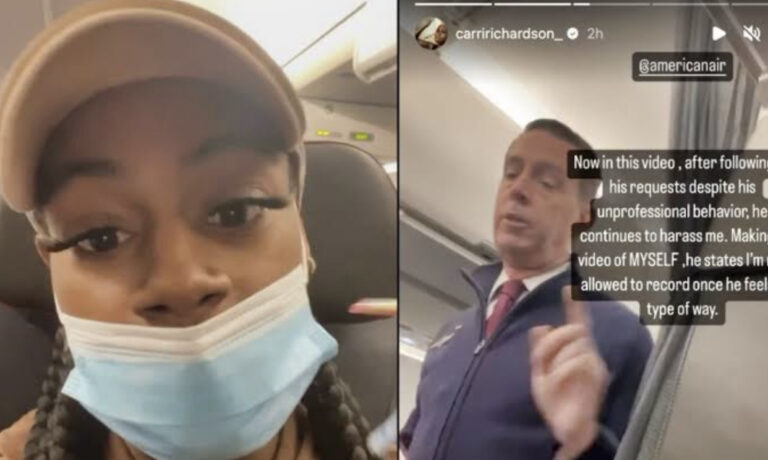 Sha’Carri Richardson shared her removal from an American Airlines flight on Instagram over the weekend.  Fox Business reports that after arguing verbally with a flight attendant, the Richardson was removed from the aircraft.

In response to the flight attendant’s request to discontinue a phone call, Richardson reportedly told NBC News that she complied, then told the man she didn’t like the tone he used to speak to her.

“Following that while standing in front of me doing the safety protocols he continued to lean over to look at my phone. He asked to see that my phones were in airplane mode at this point. He demanded that me show him. Which I did in front of him.”

Richardson explained via her Instagram Story, as reported by the outlet.

The US track and sprinter star proceeded to record a video of herself.

Richardson said to the camera. Then she turns the phone to show the flight attendant who is seen backing away from her.

The flight attendant told the athlete that she “can’t record.” And she responded.

Other passengers on the plane can be heard agreeing with Richardson, while some also demand she stops recording.

“No, I’m not going to stop recording because I was making a video to myself…”

“I definitely would have listened to instructions but the way he was talking to me was very unprofessional and then his hands were all in my face.”

A fellow passenger informed Richardson that he was missing his connecting flight due to the ongoing incident, adding that he did not care about the woman being disrespected by the attendant. Another flight attendant then informs Richardson that the captain has asked her to leave the plane.

“Does the captain know the situation that happened before removing me? So do they know this man hands is all up in my face and he was very disrespectful and I felt threatened?”

The captain refused to come to the cabin to speak to Richardson. And she asked the airline staff for the attendant’s name, which he refused to share.

Richardson proceeds to leave the aircraft as some passengers can be heard clapping.

“Y’all see it on social media, because y’all have no idea who I am.”

In one video posted on Richardson’s Instagram account, she shared that she was contemplating pursuing legal action against the airline. As well as her personal reflections about the incident, one she believes were racially fueled.

“Tell me if I’ll be wrong to pursue legal actions against the airline @americanair not only did the man threaten me but also an innocent bystander who simply just wanted a picture with me. In the beginning of the video you can hear a Caucasian male state that he doesn’t give a f as a man that male flight attendant is intimidating a woman. Also the captain not doing anything to help the situation and this flight attendant has the applause when I exited the plane when I’m pretty serious the disrespect I received would not have happened if I was a one of them. One of them even stated good luck with your ban ( I see he took the time to do some research but not stand up for what’s right) soooo @americanair this flight attendant name was John and he refused to state his last name. However him and the lady y’all see standing next to him looked me up

also if I see videos posted from this flight, watch.

Tag @americanair if I can help just one person not have to deal with a situation like this with an individual like this, I’ll take the heat”

We reaccomodated the customer on a later flight and a member of our team has reached out to learn more.