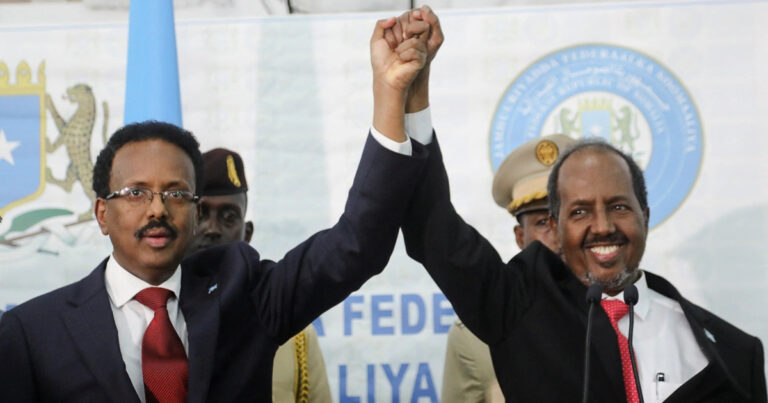 Somalia’s former president; Hassan Sheikh Mohamud; was re-elected for the second time, after a long-delayed election on Sunday;  in the Horn of Africa nation, which is dealing with an Islamist insurgency.

Celebratory gunfire erupted in Mogadishu; with many hoping that the vote will end a political crisis; that has lasted well over a year. After Farmajo’s term expired without an election in February 2021. Mohamud, who served as president from 2012 to 2017; was sworn in shortly after the votes were counted; and addressed the country in a conciliatory tone.

“It is indeed commendable; that the president is here standing by my side. We must move forward and never backwards. We have to heal any grievances.” He said referring to Farmajo. Who hailed the successful completion of the long-awaited poll.

Read more: Robert Smalls: The Exciting Story Of The Black Slave That Sailed A Confederate Ship To Freedom

“I welcome my brother here, the new president Hassan Sheik Mohamud; and wish him luck with the huge task. We will be in solidarity with him,” Farmajo said.

International partners in Somalia; have repeatedly warned that the election delays, caused by political infighting; were a dangerous distraction; from the fight against Al-Shabaab insurgents. Who have been attempting; to overthrow the government for more than a decade.

Explosions were heard Sunday; near Mogadishu’s heavily guarded airport complex. Where MPs were voting, in a reminder of the country’s perilous security situation. The blasts resulted in no injuries, according to police.

In the last 50 years; Somalia has not held a one-person, one-vote election. Instead, polls follow a complicated indirect model; in which state legislatures and clan delegates; select lawmakers for the national parliament. These lawmakers then select the president.

Before the election, Samira Gaid; executive director of the Mogadishu-based Hiraal Institute think-tank; told AFP that familiar names would have an advantage in the polls.

“People will not go for a new face; they will definitely go for old faces. People that they recognize; people that they feel they’re more comfortable with,” she said.

Mohamud, the first Somali president to be re-elected; has promised to transform Somalia into “a peaceful country that is at peace with the world.” He will inherit a number of challenges from his predecessor; including a devastating drought that threatens to starve millions.

UN agencies have warned of a humanitarian disaster; unless immediate action is taken. With aid workers fearing a repeat of the devastating 2011 famine.  Which killed 260,000 people; half of whom were children under the age of six.

He will also have to repair the damage; done by months of political chaos, and infighting; at the executive level as well as; between the central government and state authorities.

“It’s really been a lost year for Somalia,” said Omar Mahmood; an analyst at the International Crisis Group (ICG). “This long-awaited election has been divisive. Reconciliation is the most immediate challenge,” Mahmood told AFP.

The heavily indebted country; may also lose access to a three-year $400 million (380 million euro) aid package; from the International Monetary Fund (IMF). Which is set to expire automatically in mid-May; if a new administration is not in place by then.

According to the IMF; the government has requested a three-month extension; until August 17. But has yet to receive a response.

More than 70% of Somalia’s population lives on less than $1.90 per day. The international community; had long warned the Farmajo administration; that the political chaos had allowed Al-Shabaab; to take advantage of the situation, and carry out more frequent and large-scale attacks.

In March; two suicide bombers in central Somalia killed 48 people. Including two local lawmakers. According to Burundi’s army; an attack on an African Union (AU) base earlier this month; killed ten Burundian peacekeepers. It was the country’s deadliest attack on AU forces since 2015.

The Al-Qaeda-linked insurgents; ruled Mogadishu until 2011, when they were driven out by an African Union force. But they still control territory in the surrounding countryside.