Robert Smalls: The Exciting Story Of The Black Slave That Sailed A Confederate Ship To Freedom 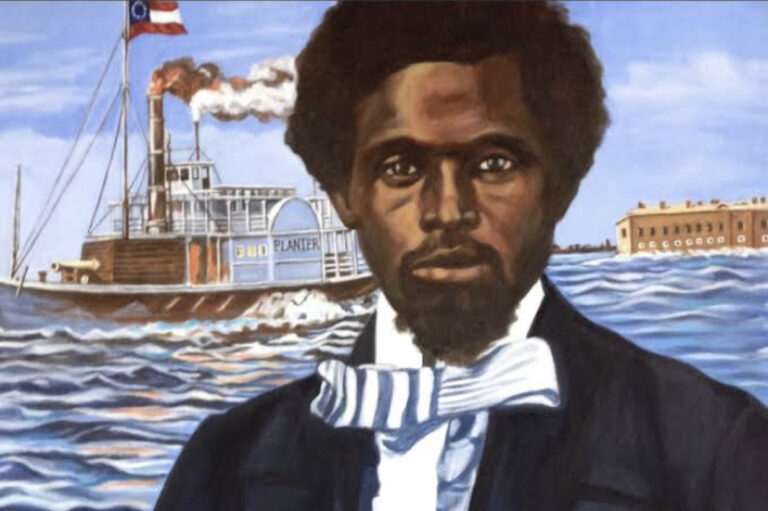 Born out of a need to buy his wife and children their freedom, Robert Smalls, a black slave, did the unthinkable and went on to become a Congressman.

Robert Smalls was born in Beaufort, South Carolina on the 5th of April, 1839. He was a black slave who got favor from his master, Henry McKee.

It was rumored at that time that McKee was Robert’s father, although this was kept a secret.

Robert, highly favored amongst other enslaved people, was given limited chores to do. He was also allowed to play with the white children.

He was allowed an education, and he learned professional skills on the side. At a young age, Robert became infatuated with ships and sailing.

Robert’s mother, seeing how spoiled and favored her son was, and fearing he might never get to know the horrors of slavery, decided to drag him at the age of 10 to the fields.

He picked cotton, rice, and tobacco. Also, he witnessed how enslaved people were ill-treated and whipped. All the while, sleeping on bare floors, this first-hand experience had changed him.

Read Also: How Enslaved Africans Revolted and Commandeered The Little George Ship Back To Africa

Due to the brutality of slavery he witnessed, Robert became rebellious and defiant. He soon became a frequent occupant of the Beaufort jail. His mother, fearing for his safety, arranged with McKee to have him sent to Charleston, where he would work as a laborer.

At the age of 12, Robert was in Charleston earning one dollar a week, with the greater part of his wages sent back to his master. He worked many jobs around Charleston, and there he met his wife, Hannah Jones, an enslaved maid in a hotel.

At age 16, Robert and Hannah got married in December of 1856, and they moved in together. They gave birth to 2 children. Eventually, Robert got himself a job on the CSS Planter.

Robert’s chance at freedom finally came in 1861 when the civil war broke out between South Carolina and United states of America. Robert assigned to pilot the CSS planter ( an armed military transport), carried out his duty with diligence and skill. This earned him trust amongst the crew owners and members both black and white people onboard.

During this time, Robert devised an escape plan, although he had to share this with the black crew members (as he needed their cooperation), and also his wife. His wife knowing that this was a dangerous mission, was willing to die with her husband for the freedom of their children.

She knew also knew what laid ahead of them if they were caught, yet she supported her husband. Now, Robert having the support of his wife needed to get the cooperation the crew members which was itself risky.

He was able to win the cooperation of his crew, after selling the idea of freedom to them. The opportunity finally presented itself on the 12th of May, 1862 when the white officers decided to sleep ashore. Robert steered the planter out of the harbor in Charleston dock. Using the signals he had learned from working with the white officials and wearing a Confederate uniform, he was able to steer the ship past 5 forts.

The black slaves onboard used this opportunity to pick up their families at different spots, though they knew they were still in danger. The USS Onward sighted the Planter and prepared to fire, while preparations were being made to load the canon, an officer noticed a white flag. They immediately ordered a cease fire.

As the Planter approached, Robert taking off his hat, shouted “Good Morning, Sir! I have brought you some of the old United States guns, sir”. There was jubilation amongst the black slaves as they were finally safe.

During the war, Robert continued to pilot the Planter in service to the Union, and when the war ended, Roberts plan elevated him to Captain of the Planter. He became the first black man to be a Captain, although never commissioned. He also facilitated the freedom of other enslaved black people in the state.

After the war, Robert Smalls returned to his hometown in Beaufort. There he bought his former home which was seized by the Union, and lived there with his family. In 1868, he was elected as Congressman to the South Carolina House of Representative.

While in office, he fought against the refusal of blacks to vote, amongst other things. He also did business with a lot of former black slaves and was successful. He was a popular and prominent person amongst both blacks and white.

Robert Smalls died in 1951 of malaria and diabetes. He died just as the South moved to bring back slavery through Jim Crows law. Robert believed that Blacks needed an equal chance in the battle of life.

Meghan Markle Reveals She is 43% Nigerian After Genealogy Test