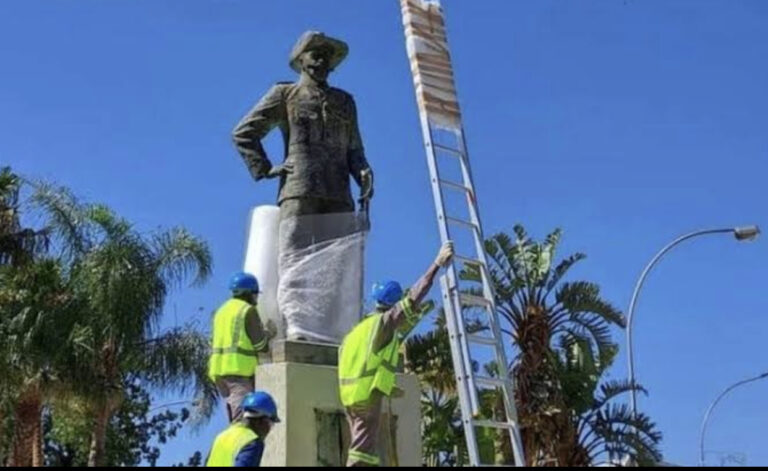 A statue commemorating a controversial German colonial officer was removed and relocated by authorities in Namibia’s capital Windhoek on Wednesday as a result of pressure from local activists.

Curt von Francois, a German army commissioner who is thought to have founded Windhoek but which local historians and campaigners dispute, was honored by the monument.

Von Francois was shown in the statue, which stood on a tall pedestal in front of city halls, wearing a military uniform, a moustache, a huge hat, and wielding a sword.

“This moment is a recollection of dignity, our city has been white-washed,” Hildegard Titus, an activist with the A Curt Farewell movement that pushed for the statue’s removal, told AFP.

“There is an emotional tie to the statue being taken down but it also has to do with historical accuracy”.

The city council said the statue, which A Curt Farewell described as “a reminder of genocide”, will now be kept at the Windhoek City Museum.

There it will be displayed with an explanation of the historical context, said Aaron Nambadi, a curator at the museum.

“We as historians and curators were involved in this project to correct the false narrative that von Francois was the founder of the city,” Nambadi told AFP.

In what historians have dubbed the first genocide of the 20th century, German invaders massacred tens of thousands of indigenous Herero and Nama people between 1904 and 1908.

It provided more than one billion euros ($1 billion) in financial aid to the victims’ heirs, who many Namibians claim were not given enough opportunity to participate in the negotiations.

Namibia requested that the terms of the agreement be renegotiated last month.

The removal of von Francois’ statue comes two years after the statue of Cecil Rhodes, a British colonialist, was beheaded by activists at the University of Cape Town in neighbouring South Africa during protests sparked by the death of George Floyd.