The Mysterious Friendship Between The Queen Of England And Nelson Mandela: He Was the only Non Royal Allowed to call her by her Name 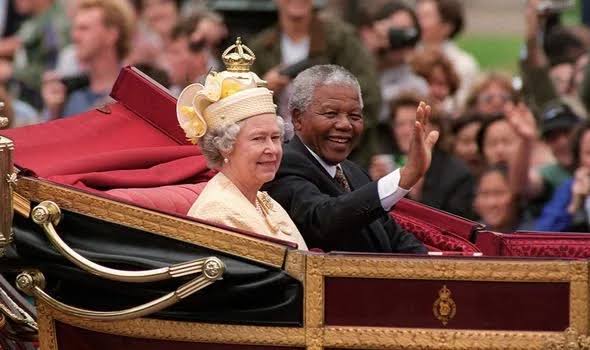 For her, many are able to call her Granny, Mummy or Lilibet, but anyone who isn’t an immediate member of the royal family has to refer to the monarch by her official title. You should always refer to Queen Elizabeth as “Your Majesty”, according to Rachel Kelly, a public relations executive at VisitBritain, the U.K.’s official tourism office.

Even Heads of state, politicians and royalty from other countries must not forget to take a more formal approach while addressing the monarch.

But, there has been only one non-royal, a person outside of the Royal Family who has been allowed to call the Queen of England by her first name. According to Royal Commentator Richard Fitzwilliams, South African leader Nelson Mandela called the monarch ‘Elizabeth’ whenever they were together.

The Friendship between Nelson Mandela and Queen Of England

The royal commentator told the Express; “He called her Elizabeth and his affection for her was warmly reciprocated.

“Her state visit to South Africa in 1995 when he was President was one of the highlights of her reign.”

Queen Elizabeth and Mandela shared a close bond. They were so close that “protocol simply became cast aside,” a report by royalcentral.co.uksaid. Mandela usually ignored royal custom anytime they met. Still, their friendship was based on personal respect. “When they met, it was never just another state ritual for The Queen or the usual practice of meeting with ex-leaders, it was the meeting of two friends who held each other in only the very highest respect,” the report by royalcentral.co.uk said.

Nelson Mandela was so comfortable with her that he even once commented on her weight, according to a memoir written by his former personal assistant Zelda la Grange. “Oh, Elizabeth, you’ve lost weight,” Grange recalled Mandela saying to the Queen.

Grange, who worked for Mandela for many years and followed him wherever he went, gave details about his close friendship with the Queen in her memoir Good Morning, Mr Mandela.

“On a visit to Britain, I was struck by the warm friendship between Madiba and the Queen.

“‘Oh Elizabeth,’ he would say when he greeted her, and she would respond; ‘Hello, Nelson.’”

“I think he was one of the very few people who called her by her first name and she seemed to be amused by it,” Grange wrote.

The world has had some great men and women, but very few have had as much of an impact on history as Mandela has had. Remembered as South Africa’s first Black president and an international symbol of freedom and equality even after death; Mandela continues to influence the world with his great and timeless words of wisdom. 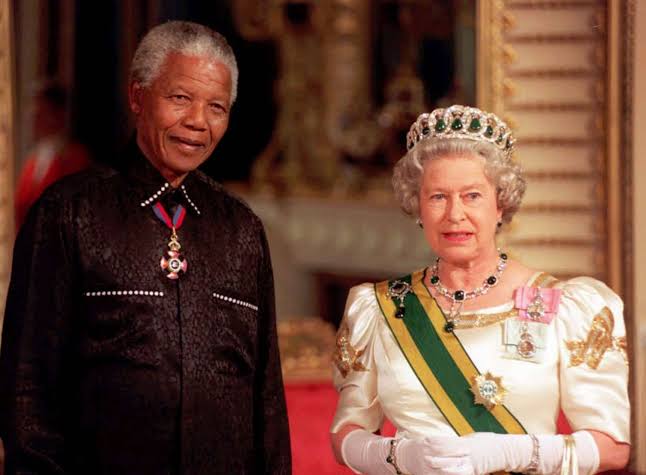 According to Chief Emeka Anyaoku, a former Commonwealth Secretary-General; the relationship with the Queen began at the 1991 heads of government meeting in Harare, Zimbabwe; “Mandela had been invited to Salisbury by Robert Mugabe with my agreement although, at that time, he was only the leader of the African National Congress and not a head of government,” recalled Anyaoku. “At that time, indeed, South Africa was not even a member of the Commonwealth.”

Anyaoku said he was one of the first to arrive at that meeting in 1991. He later found Mandela who was not president as of then; speaking with a liaison officer. “There had been some misunderstanding, and he [Mandela] was obviously expecting to come to the Queen’s banquet, which is strictly for heads of government,” Anyaoku recounted.

“So, Robert Fellowes [The Queen’s then Private Secretary] and I had to decide what advice to give The Queen, who, at that point, had not even met Mandela. When we told her what the situation was, she immediately said: ‘Let’s have him.’

“…I thought it was a remarkable piece of judgment,” said Anyaoku. “After all, Mrs Thatcher had called Mandela a terrorist at our Vancouver meeting in 1987. So, he came to the banquet. In May 1994, he became president of South Africa and, in the following month, South Africa rejoined the Commonwealth.”

That was the beginning of their extraordinary friendship. They were so close that Mandela’s death did affect her on a very personal level, observers said. During his last days, she visited him; “as much as she could” and “grieved deeply for him” when he died, according to the Express.

She wrote; “My heart shattered. A physical pain I cannot describe to anyone, but I am sure has been felt by so many people.

“I so badly wanted to walk to Mandela to give him a hug but I couldn’t.