Earlier in February, lawmakers reintroduced a bill to make Juneteenth a federal holiday and now; months later, the senate has unanimously passed a resolution to herald the day as a holiday.

The Bill was passed on Tuesday establishing June 19 as Juneteenth National Independence Day; a US holiday commemorating the end of slavery in the United States.

The legislation has gained momentum since the massive Black Lives Matter protests sparked by the police killing of George Floyd last year; and the Democrats’ takeover of the White House and Congress. 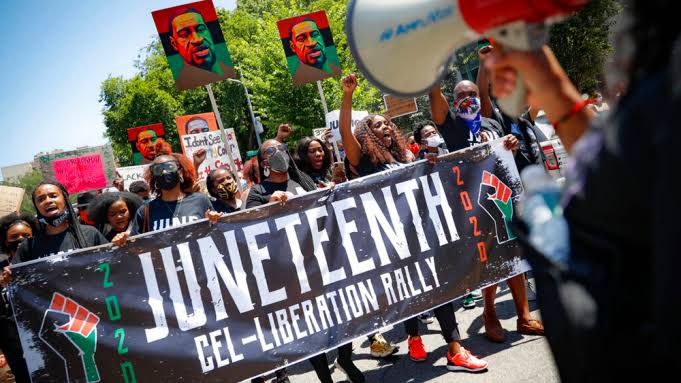 But Wisconsin Republican Sen. Ron Johnson blocked the bill in 2020; saying that the day off for federal employees would cost US taxpayers hundreds of millions of dollars. Johnson dropped his objection this week despite his concerns, paving the way for the bill’s passage in the Senate.
“Although I strongly support celebrating Emancipation, I objected to the cost and lack of debate,” said Johnson in a statement. “While it still seems strange that having taxpayers provide federal employees paid time off is now required to celebrate the end of slavery, it is clear that there is no appetite in Congress to further discuss the matter.”
The measure needs to pass the House and be signed by President Joe Biden to become law. House Majority Leader Steny Hoyer tweeted that the chamber would vote Wednesday.
“I look forward to bringing this bill to the Floor, and urge bipartisan support,”; Hoyer wrote thanking the bill’s bipartisan sponsors.
Major General Gordon Granger announced in Galveston, Texas, On June 19, 1865; the end of slavery in accordance with President Abraham Lincoln’s 1863 Emancipation Proclamation.
Additionally, in1980, Juneteenth became a Texas state holiday. In the decades since, every state but South Dakota came to officially commemorate Juneteenth, but only a handful of states observe it as a paid holiday.
Share. Facebook Twitter Pinterest LinkedIn Tumblr Telegram Email
Adaugo