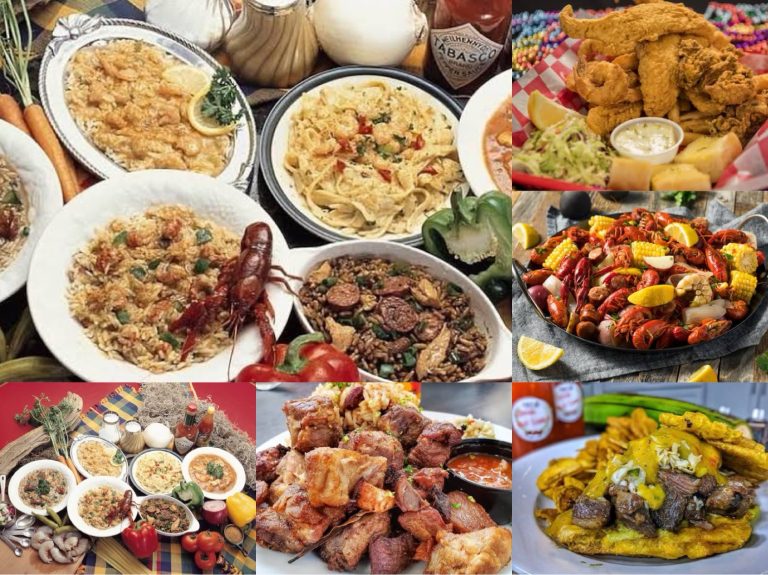 There are several remarkable features of Louisiana, but one of the most significant attributes you can’t overlook is the number of black-owned restaurants in the state. You can find them in most neighborhoods, with their incredible dishes available at all times. This article highlights the top 10 black-owned restaurants in Louisiana. It will help you locate the one nearest to you whenever you find yourself in the state and willing to try out their fantastic cuisine.

Whether you are new to the state or come frequently, there’s always a place to find a nice meal. This is, however, a way to support black-owned businesses in Louisiana. It is a gesture that motivates black people to set up their businesses within the state regardless of other challenges.

Before we dive into details, it is necessary that we have a brief look at some key facts about Louisiana. It will help provide a precise understanding of this topic.

According to Britannica, Louisiana is a constituent state of the United States of America. It shares boundaries with Arkansas to the north, Mississippi to the east, Texas to the west, and, to the south, the Gulf of Mexico.

The capital is located in Baton Rouge. As of 2020, the state recorded a total population of 4.6 million people. It is governed by John Bel Edwards (Democrat) and Senator Bill Cassidy (Republican), and John Kennedy (Republican).

There are about 488 cities in Louisiana, and they include; New Orleans, Baton Rouge, Shreveport, Metairie, Lafayette, Lake Charles, Bossier City, Kenner, Monroe, Alexandria, Prairieville, Houma, and many others. New Orleans is the most populated, followed by Baton Rouge.

There is a rich Creole/African culture in Louisiana, due to the trans Atlantic slave trade, in which lots of enslaved Africans were shipped to the area.

And that is why, there is a rich food heritage in Louisiana, with recipes inspired by their African/creole/Caribbean roots.

Now that we are familiar with brief facts about Louisiana and the several cities in the state, we can now look at the top 10 Black-owned Restaurants in Louisiana. You have nothing to worry about as all restaurants featured on this list provide takeout or roadside pickup.

Here are the top 10 Black-owned Restaurants in Louisiana:

Li’l Dizzy’s Cafe is one of the black-owned restaurants in Louisiana, established in 2005 and still running to date. It is located in New Orleans, Louisiana, and the cuisine is deliciously Creole-Southern.

Wayne Baquet owns the restaurant. Wayne is related to Eddie Baquet, an iconic restauranteur in New Orleans. Eddie Baquet, the owner of the legendary 7th Ward eatery ‘Eddie’s,’ taught his son all the insider secrets.

Li’l Dizzy’s Cafe is known for making some of the best-fried chicken in the city. However, the cafe has some fantastic food options on its menu—especially the Soul cuisine classics with a creole twist. Po Boy, Seafood Platters, Catfish Jourdain, and more are available. Li’l Dizzy’s Cafe is a must-visit for genuine Southern cuisine.

Also, read on: Meet Serita Braxton, The Black Woman Who Launched Her Own Premier Tequila Brand

Backatown coffee parlor is another excellent black-owned restaurant in Louisiana, established in November 2017. It is located in the heart of Storyville, New Orleans and it also contributes to the revitalization of Basin Street.

The restaurant is owned by Jessica and Alonzo Knox. They received their moniker because they’re not quite uptown, not quite Downtown, but they’re definitely Backatown!

The Backatown coffee parlor is an amazing place to grab a cup of coffee with friends or hold a quick meeting. However, they also offer pastry and you can decide to take a brief lunch.

The dooky chase is also a black-owned restaurant that was established in 1941 and still running to date. The restaurant didn’t build immediately into what it is now. It was initially a sandwich shop, then later became a lottery ticket outlet before becoming a famous bar and finally becoming the well known Dooky Chase Restaurant.

Dooky Chase Restaurant is located in the historic black, Creole, and Cajun district of Treme. The restaurant was founded by Emily and Dooky Chase. Currently, it remains operated and owned by the family. Dooky Chase’s Restaurant quickly became a gathering spot for New Orleans’ music and entertainment, civil rights, and culture.

On its menu, they offer traditional Creole. Creole Gumbo, Po Boys, Red Beans Rice, and other delectable Creole foods are available. You can also get Southern favorites like Mustard Greens and Stewed Okra. With a glass of your favorite beverage, serve Peach Cobbler or Praline Bread Pudding for dessert.

The Barrow’s Catfish restaurant is another beautiful location on our list of black-owned restaurants in Louisiana. It was established into Barrow’s catfish in 2018. The business started in 1943 as Barrow Shady Inn and was owned by William “Cap” Barrow, Sr., and his wife Mary. It was later destroyed by a natural disaster and was recently built back in a new location.

Barrow’s Catfish Restaurant is one of the longest-running black-owned restaurants located in New Orleans and it has been up for 75 years.

After finishing your catfish plate, drive a few blocks over to the Hollygrove neighborhood to see the Lil Wayne Mural.

Fritai Haitian Street Food is considered one of the best black-owned restaurants in Louisiana. It was initially located in St. Roch Market until recently when it was moved to its own storefront.  It was established in New Orleans in 2015.

The restaurant is owned by Chef Charley Pierre. The cuisine is influenced by his Haitian heritage, but with a New Orleans twist.

Plates, wings, and sandwiches are on the restaurant menu. Seared Whole Fish, Griot-Crispy Pork, and Haitian Smothered Greens are just a few of the dinners that have a strong Haitian influence. Fried Plantains and Plantain Chips are among the basic Creole sides available.

Originally established as a bar in 1957, Willie Mae’s Scotch House moved to its current location on St. Ann and has since gained recognition for its food offerings and homely atmosphere. On a regular day,  visitors can stop by to savor what is regarded as the best fried chicken in New Orleans.

The Willie Mae’s chicken is fried to order in a secret batter, resulting in a golden light crunchy crust while leaving the chicken moist and hot inside. Willie Mae’s menu is also short and sweet, and also includes catfish as well as sides like red beans and rice, butter beans and rice, and mac and cheese.

The owner of Vyoone’s restaurant, Vyoone Segue has four generations of family in New Orleans and is of French African Creole heritage.

This black-owned restaurant in Louisiana has a beautiful outdoor patio which diners can enjoy when the weather is nice. Occasionally you can also enjoy live Jazz with your meal in the courtyard or inside the restaurant. The menu at Vyoone’s is seasonal, which means all the meals are made using only foods that are in season in the Southern United States.

The menu includes; many French classics. There is Escargot, French Onion Soup, Coquille St Jaques, and more. If you come for Sunday Brunch there is a separate but equally delicious menu. You can enjoy Crab Cake Benedict, Crevettes Au Gruau, and of course, French Toast.

The Bennachin is known for bringing their customers a taste of Africa in the heart. The chef at Bennachin draws inspiration from The Gambia and Cameroon for  the menu. Inside you’ll find a comfortable and friendly atmosphere. This restaurant is a Black-owned restaurant in Louisiana for vegans as well.

The founder of this black-owned restaurant in Louisiana is Lisa Nelson, who is locally known as Queen Trini. She brings the flavors from her native Trinidad and Tobago to her food. She opened the doors to her restaurant after years of dishing out her flavorful Trinbagonian island soul food in the back of convenience stores, food festivals, and pop-ups.

Queen Trini is famous for packing big, bold flavors into her dishes such as her curry and jerk chicken, peas and rice, doubles box (curry chickpeas served between turmeric flatbread and topped with chutney and hot sauce), and coco bread fish sandwich. Also, her jerk chicken won the Marley Festival in 2019.

Owned by Shanel Snowton and Collette Tate who refer to themselves as the two sisters, this black-owned restaurant started its business dishing out country soul food on a side street off Canal St and Claiborne Ave in the ’70s.

Currently, the Two Sisters has opened another location on the Westbank of New Orleans. The menu of affordable soul food features daily specials such as red beans and rice with a link of smoked sausage and cornbread for $8.75 on Mondays, and a stewed hen dinner for $10.50 on Sundays. A full breakfast is also offered daily, so you can drop in for breakfast, lunch, or dinner for an inexpensive dining experience.