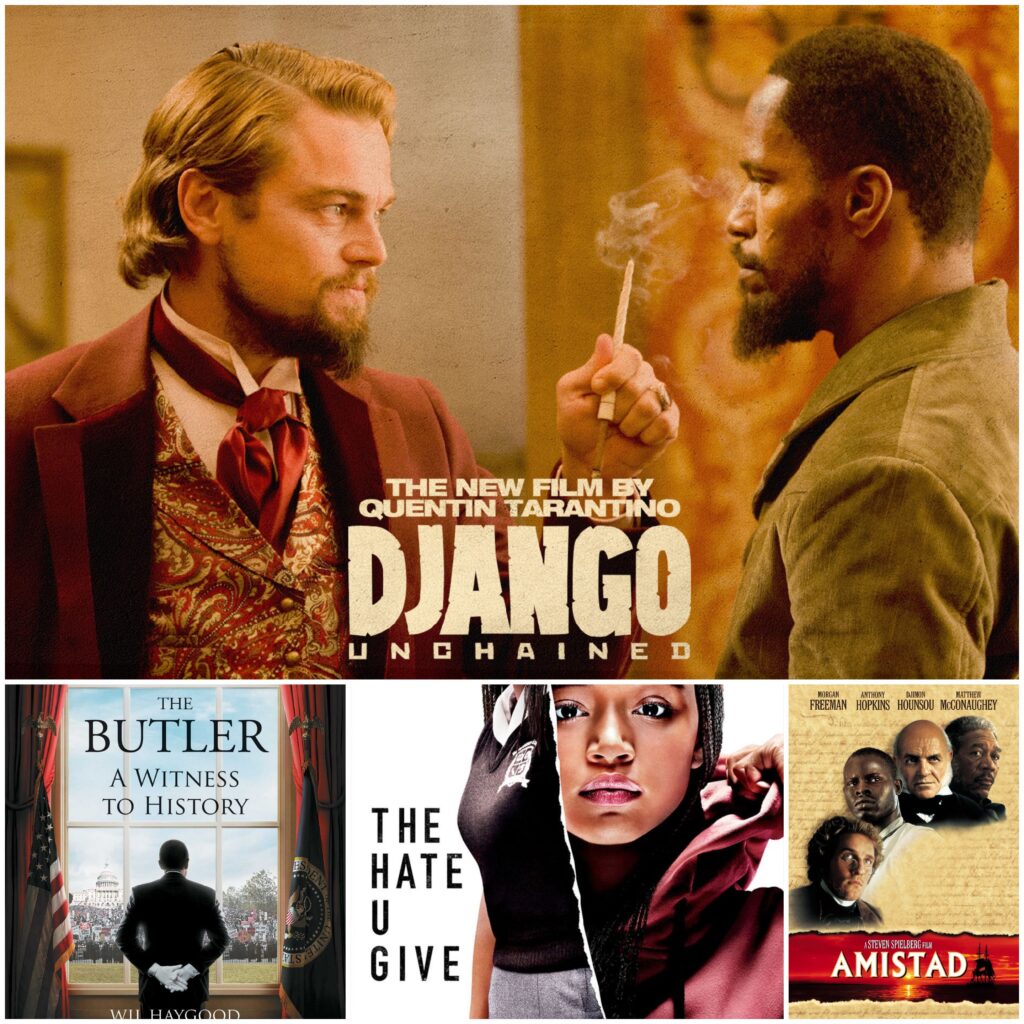 The people known today as African Americans, are originally the descendants of Africans who were captured and forced into slavery. The experiences of enslaved Africans shaped the history of the presence of Black people in America. Art is a reflection of the society and one of the ways that the struggles and pains of African-Americans are being retold, is via movies about black history.

To remember history; movies, documentaries and drama have been used to expose the struggles that confronted black people.

Some movies about black history have succeeded a great deal in explaining how black people struggled and still struggle in America. The racism and brutality that still exists till this day.

Find below, the Top 10 Movies About Black History that have succeeded in re-enacting the stories of various African-American struggles and experiences in America.

JUDAS AND THE BLACK MESSIAH

Judas and the black Messiah, is one of the top 10 movies about black history. Set in 1968, this 2021 black history movie, tells the story of how Fred Hampton, the leader of the Black Panthers Party was betrayed by Williams O’Neal.

Based on a true life history, this movie bagged 6 Oscar nominations; and is therefore a must watch.

William O’neal, the narrator in this movie, is a small-time criminal who was arrested for disguising as an FBI agent & attempting to steal a car. The charges against him were however dropped on one condition, which was to work undercover for the FBI. His primary duty was to pretend to be one of the members of the Black Panthers Party, infiltrate the group and return to the FBI with information about the group. Following the actions of William, Fred Hampton the leader of the black panthers party was killed by the FBI.

Selma, a 2014 black movie, made it to our top 10 movies about black history. Starring Nigerian-American Actor David Oyelowo as Martin Luther King Jr, This movie depicted the struggles of black people on the right to vote.

Selma is a historical drama that encapsulates the moments in history when black people were deprived of voting rights, because the civil right acts of 1964 didn’t stop the discrimination of black people. As depicted in Selma, an elderly woman walks to the clerk to register to vote, but the clerk intimidates and threatens her.

This denial of Ms cooper caused Martin Luther King Jr. to organize a long march from Selma to Montgomery, and ensured the president signed the voting rights of 1965.

“The 1965 Selma-to-Montgomery long marches are among the most important landmarks in the American Civil Right Movement, and as such this story is heroic.”

The movie Selma is historically accurate. This movie can be described as thought-provokingly important, educating and enlightening.

Selma is a good teaching aid and can be described as an “admirable accomplishment’ with the primary aims of entertaining, educating and enlightening. It also stayed true to facts; taking our memories on a ride back to the period of struggles of the common black man in America.

The real Malcolm X originally named Malcolm Little was an African American leader in the civil rights movement. He was a minister and supporter of Black nationalism who cajoled his fellow Black people to protect themselves against white aggression.

As one of our top 10 movies about black history, the Malcolm X movie revolves around the life of Malcolm Little, played by Denzel Washington, whose father, a local minister and an activist against oppression, was murdered by the Ku Klux Klan. Malcolm then became a gangster and ended up getting locked up in jail. Although his father was a Baptist, Malcolm converted to Islam while in a jail and started preaching and teaching the tenets of Islam. He also discovered the nation of the Islam and the writings of Elijah Muhammed.

After his jail term, he went on a pilgrimage to Mecca, changed his name and became a Sunni Moslem.

Malcolm was assassinated in 1965 and he died a martyr. Malcolm before his assassination was a fighter against the oppression and racism by any means necessary.

Released in 2019, Just Mercy is a reenactment of the travails of a black man; Walter McMillian popularly known as Johnny D, who was sentenced to death for the alleged murder of a white girl.

McMillian was found guilty and sentenced to death, by the racist judicial system after a criminal falsely accused him of the crime of killing a white girl. Several witnesses spoke up in his defense, yet he was sentenced to death by electrocution.

Just Mercy tells a complete story of how even in the face of truth, the black man is suppressed and denied justice.

Bryan Stevenson, a lawyer from Harvard, who was about starting up his career, was discouraged not to pursue justice for Johnny D; he however did otherwise and ended up getting justice for McMillian.

This 1997 black history movie is based on a 1839 story of the Mende tribe in Sierra Leone, who fought and overpowered their white captors in a slave ship, when Cinque an enslaved African, led the uprising when a slave ship named La Amistad set sail from Cuba to America in 1839.

During the long voyage, Cinque led other enslaved Africans in an uprising against their captors. They left two of their captors alive, to sail them back to Africa, but were deceived and sailed to America, where they were captured as prisoners. The Enslaved Africans who couldn’t understand what their fate would be, were thorn between legal battles; but with the help of Edward Tappin, an abolitionist leader, they secured the services of an attorney Roger Baldwin of Connecticut to defend the Africans. Even with odds against the Africans, they were eventually set free, Cinque returned to his native land but never reunited with his family.

Two enslaved people, Kunta Kinte and Fiddler were afraid of honoring the request made by Moyer, to take over his stead. Although Kinte was willing, Fiddler had doubts clustered with fears.

There was an unsuccessful revolt, which led to the execution of Moyer and two other slaves on Christmas eve. This act prompted Kinte and Fiddler to drop their fears and championed the course of liberation.

12 Years a Slave is 2013 drama based on the true-life narrations in David Wilson’s 1853 memoir by the same title. Directed by Steve Mcqueen and staring Chiwetel Ejiofor, Lupita Nyong’o, Adepero Oduye, 12 Years A Slave tells the story of Solomon Northup, a free African-American, who lived free with his wife and two children in New York and worked as a violinist until he was lured to take a music contract which ended up being a kidnap.

Northup is shipped down south to New Orleans and given a new identity which saw him renamed as Platt, a supposed runaway slave from Georgia. In twelve years of his captivity, Northup got to work in 3 different plantations as a slave. In his last plantation, Northup meets with Samuel Bass, a Canadian labourer, who due to his Christian faith is opposed to slavery. Bass helps Northup send a letter he wrote home which aided his eventual freedom.

THE HATE YOU GIVE

With 97 percent rating on Rotten Tomatoes, The Hate You Give is one of the many great stories about the reality of contemporary African-Americans. The Hate You Give, directed by George Tillman Jr. and stars Amandla Stenberg, Regina Hall, Russell Hornsby, KJ Apa, Sabrina Carpenter, Common, and Anthony Mackie, is a movie based on the 2017 novel of the same title.

The protagonist, Starr Carter, a 16-year-old pupil of Williamson Prep, witnesses the shooting of her childhood friend,  Khalil, by a policeman during a traffic check. Starr’s community, Garden Heights, a predominantly black community, is one characterised by gang crimes, anti-police orientation and fear of violence from both police and gangs.

Starr’s immediate family decides to keep the fact that she was a witness to Khalil’s death a secret. While Starr continuously struggles to harmonise her two conflicting personalities of schooling in a predominantly white school and living in a predominantly  black neighbourhood, she also has to deal with the fact she owed Khalil a duty to let the people know the facts surrounding his death.

When she and her family finally decide that Starr told the event she witnessed, She is made to wear a disguise and appear on a television broadcast. While on the broadcast, she names the notorious gang leader as part of the problem of her community.

The Hate You Give throws more light on the contemporary problems faced by African-Americans in the black neighborhoods.

Most part of the movie is a recount by the protagonist, Cecil Gaines, whose childhood in the 1920 was characterized by discrimination based on race. As a child, living in a plantation in Georgia as a laborer’s child, he witnessed his mother being sexually abused and his father killed by the master.

Leaving the plantation as a teenager, Cecil is hired as a servant in a hotel, after the chief-servant catches him breaking into the pastry store. With the aid of the skills acquired at the hotel, Cecil gets a job at the Washington D.C Hotel. Later he is employed in the white House.

After getting married and seeing his first son get into the university, Cecil’s problem becomes how to curtail his son Louis’s human rights activism in a society where black rights are not recognized. In an unjust society, there is always a thin line between human rights activism and hooliganism. Cecil initially does not see his son’s constant conflict with the Ku Klux Klan and the police as a heroic act, but he later understands Louis’s plight is for the greater good of the African-American community.

Directed by Quentin Tarantino, starring Jamie Foxx, Christoph Waltz, Leonardo DiCaprio, Kerry Washington, and Samuel L. Jackson; Django Unchained made it to our 10 top movies about black history. It tells the story of Django, an African-American slave, who was separated from his wife after their capture. Django is fortunate to meet a German dentist and a bounty hunter, Schultz, who buys him out of slavery and offers him a job, which is to aid him arrest some outlaw brothers who are in-charge of a plantation.

Django is captured and attempted to be sent back to slavery at a mine. He luckily evades the plot by convincing his escorts that he is a certified bounty hunter with a warrant to arrest an outlaw at the plantation where he was arrested.

These ten movies on African-American history and also contemporary reality are quite informative.

Whether fiction or true-life stories, they deliver true accounts of slavery, racism and other forms of discrimination that have been endured by African-Americans. Though our list is informed by how educational these movies are, you should be rest-assured that they are also blockbusters and thrillers.