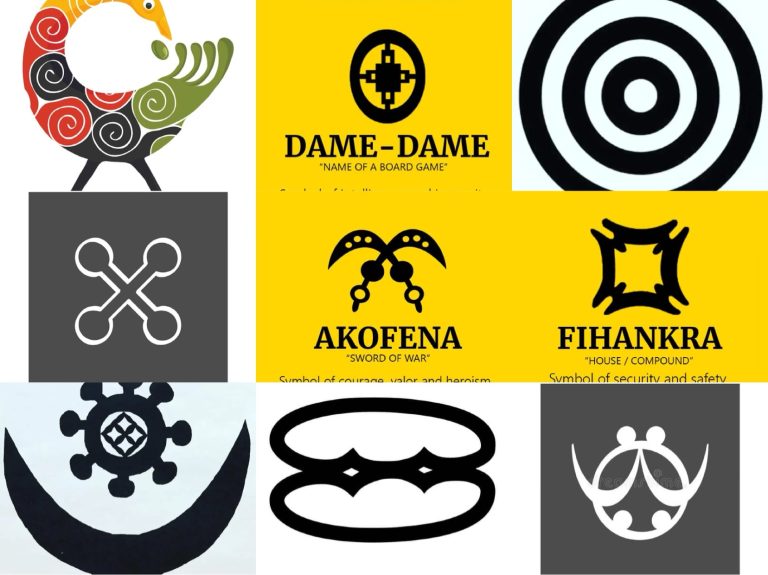 When you talk about African Writing Systems, the most popular one is the Egyptian Hieroglyphics. However, not many people understand that writing systems like the Adinkra symbols of the people of Ghana, is embedded in symbolism and have been in existence for as old as the continent itself. The ancient African Symbols carry deep meanings and cannot be understood by mere looking at them, because the African people have always been spiritual and cosmic as well as communicating in deep proverbs and obscured symbols as a way of passing messages.

Ancient writing systems like Nsibidi, Adinkra Symbols, Ogam writings are just only coming to light and in this article, we would be focusing on 15 of the Adinkra Communicative Symbols of the Akan People Of Ghana, West Africa.

The Akan People of Ghana

Akan has, since the 1950s, been used in Ghana to refer to the language whose dialects include Fante, Akuapem, Asante, Bono, Wassa, Agona, Akyem, and Kwahu. These dialects are spoken in Ashanti, Central, Brong Ahafo, and in parts of Eastern and Western Regions of Ghana. The language is spoken by about 49.1% of Ghanaians as a first language (Statistical Bulletin, 2002).

Akan is also spoken as a second language by the Anyi (Aowin), Sehwi, Nzema and Ahanta to the West and by speakers of Guan languages such as Efutu/Awutu, and Anum-Kyerepong- Larteh to the South and East. In these areas (except in the Nzema-speaking area) Akan is the medium of instruction in the first few years of primary school, and it is used in church and for trade. Akan is also an important language of trade in almost all the ten regional capitals of Ghana.

Adinkra Symbols are visual symbols that embody evocative messages that  convey traditional wisdom, philosophical thoughts, ideas or aspects of life or the environment. Once obscured, these West African symbols are now also featured in Hollywood.  Adinkra symbols have been used in movies like; The Sorcerer’s Apprentice, Avengers Age Of Ultron and The Black Panther.

Adinkra is said to be Primordial and derived from nature and adinkra symbolism has a name and meaning derived either from a proverb, a historical event, human attitude, animal behavior, plant life, forms and shapes of inanimate and man-made objects. There are about 122 known symbols.

The name “Adinkra” can be traced back to the word “Dinkra” of the Akan/Twi Language, of the Akan people of Ghana. “Dinkra” means: to be separated, taking leave or farewell and were engraved in funeral clothings.

The history of these Adinkra symbols date centuries back. They are believed to have their origin from Gyaman, a former kingdom in today’s Côte D’Ivoire.

This Is on one of the Adinkra symbols that highlights self care. For the Akan people, having a sense of calm and tranquillity within you helps decrease the impact of the turmoil on the outside, even in the midst of obstacles and hardships. Peace of mind is essential in day to day living and you can obtain it by remaining calm and cool during difficult situations. Adwo is a word that means “quiet.” It is a sign of tranquillity, peace, and quiet.

Adinkrahene is one of the adinkra symbols of authority. This is an African symbol of leadership, greatness and charisma. It has played a critical role in designing other signs. It shows how essential leadership is in any community. Most of the great leaders are charismatic, and therefore this symbol symbolizes the honourable features of a good leader.

This Adinkra symbol means “battle sword” and refers to the state ceremonial swords. It is a sign of governmental power, legality, a ruler’s legitimised authority, and acknowledgement of bravery and heroic actions. This symbol can be seen In the top left quadrant of Ghana’s coat of arms, one of these ceremonial swords is crossed with a linguist’s staff.

Akoma is one of the important adinkra symbols. It is a symbol of endurance and understanding from the Asante people of modern-day Ghana, and it can be identified as the modern-day standard heart. It represents love, unity, endurance, patience, tolerance, benevolence, and faithfulness. Its literal meaning is “the heart.” It also denotes forbearance in the face of adversity and emphasizes the importance of patience. The Akoma emblem, symbolises love, benevolence, patience, constancy, tenderness, perseverance, and consistency.

“Aim high or think ahead” symbolizes forethought, planning ahead and also setting goals. To think ahead means you always measure the future and evaluate the impact of your actions not only for the present but also in the future. This symbol reminds you to be cautious, vigilant, as well as become excellent at whatever you do.The Akan people believe in planning for the future and also saving for the rainy day as well as making sure you become a better version of yourself which would help your society.

The symbol of “Think Ahead” is based on the Anansi Ntonan principle of the Akan people; which encapsulates wisdom, creativity, good judgement in decision making and actions and the  complexities of life.

Due to the complexities of life, a person needs to always aim high and also think ahead in other to be better at decision making and also have good judgment.

One of the most adinkra symbols of Anansi Ntonan. This symbol signifies wisdom, creativity, knowledge, and the complexities of life. Wisdom is associated with knowledge, experience, and sensible judgment when it comes to making decisions and taking actions. Creativity involves using imagination and unique, original ideas in order to create something different and new. All this is required when building something as complex as a spider’s web, which is the idea behind this symbol.

Dame-Dame is the name of a board game played in Ghana. This represents intelligence, innovation, and strategy. The two players start with 14 pawns neatly arranged on one end of the board in Dame dame, which is played on a 9×9 board. This game demands a great deal of focus and intelligence, and the symbol represents the inventiveness required to play a standard game of Dame Dame.

The Fihankra Adinkra symbol represents fraternity, safety, security, completion, and solidarity. Among the Akan of Ghana, communal living is the norm. “It takes a village to raise a child” is not just a cliche; it is a genuine experience. In the past, the most severe punishment for a misbehaving member of the society was exile.

This Adinkra symbol means “God; there is something in the heavens,” symbolising inspiration and hope. This is one of the Adinkra symbols that is a prayer to God for a wish to be granted. The Akan people believe that God is in the heavens, listening to their prayers, blessing them, and watching them. They also believe  he is present to see that his intentions on Earth are carried out.

Nkyimu is one of the adinkra symbols for artisans. This Adinkra symbol is a beacon of precision and skillfulness. The artisans start by blocking the Adinkra cloth with lines in a rectangular grid using a broad tooth comb. The process happens before stamping it with symbols. This technique symbolises the preparations to be made to get high-quality products. The emblem also represents those people who are innovative in life.

The Nsaa symbol is a kind of woven fabric. It is a mark of excellence, genuineness, and authenticity, like in the Akan saying “Nea onnim nsaa na oto n’ago,” which means “He who does not know excellent nsaa will buy the counterfeits.” The uncritical and inexperienced and those uneducated in quality principles may not differentiate the real from the counterfeit, but not the wise. They can detect quality from a long distance.

This Adinkra symbol represents unity, love, and harmony. It also signifies the critical importance of a bond that exists between a man and a woman. The Adinkra proverbs “Kyekye pe aware” means that the North star represents deep love for marriage. It is always in the sky, waiting for the moon to return. Thus, this symbol represents how a woman always waits for the return of her husband.

This symbol is characterised by a bird retracing its steps to get a lost egg. The Adinkra symbol of Sankofa means that it is not taboo to collect what has been left behind. Therefore, with every experience in this life, a person should become wiser. No matter the situation or the pain of incident, a person should learn how to deal with such situations in the future.

The Adinkra Symbol of Ti koro nko agyina literally means One head (or person) does not hold council, and that is the background of the symbol which also means two heads are better than one.

This symbol carries the message that no man is an island and working as a team is better than working alone and one cannot take the best decisions by just discussing with themselves. However it also symbolizes Companionships, partnership, marriage, love and communal living.

Amongst the Akan people, Marriage, Companionships, Partnerships and Love are highly revered.

The Akan Proberb, “Hu m’ani so ma me nti na atwe mmienu nam” which translates to “for the sake of helping each other, the antelope walks in pairs” also connotes to this Adinkra symbol which is used and revered amongst the Akan people. The Akan people believe that collaboration is much better than strife and competition, hence the Symbol to remind members of the community.

The Republic of Ghana presented the Adinkra symbol of “Two Heads Are Better Than One” to the United Nations. It may be seen hanging on one of the walls in the delegates’ lounge in the United Nations Building in New York City

Robert Smalls: The Exciting Story Of The Black Slave That Sailed A Confederate Ship To Freedom