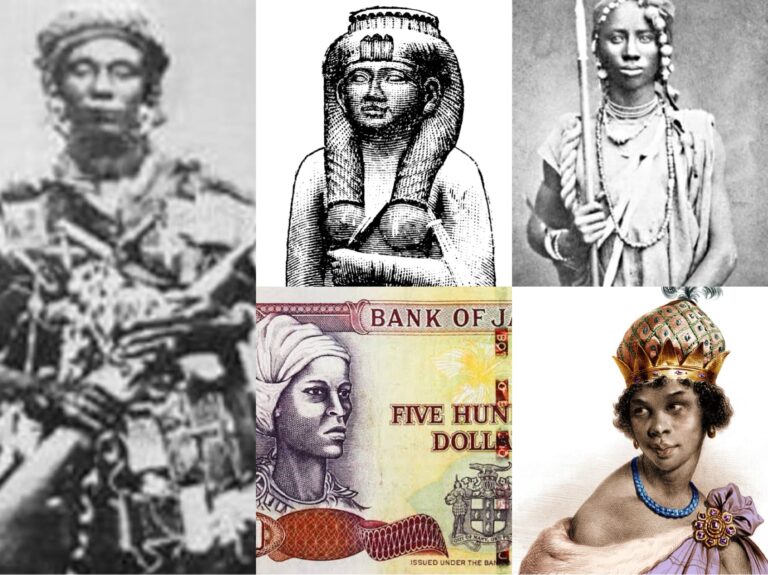 Ancient kingdoms and empires flourished on the continent for centuries both before and throughout the period of European colonization. African Female warriors who led armies in battle against advancing European powers to protect their people from invasion and enslavement were a part of these flourishing African empires and kingdoms.

Although Black women have performed some amazing feats in battle, their stories are frequently ignored. Among those who battled for independence from colonial occupation are the African female warriors/queens and the all-female army listed below.

From 40 B.C. to 10 B.C., one of the African female warriors, Queen Amanirenas ruled the Kingdom of Kush in the Nubian region, which is now Sudan. Amanirenas launched a surprise attack on the Romans when emperor Augustus of Rome overthrew the neighboring Egyptian state in 30 B.C. with intentions of advancing on Kush later that year.

Three Roman-ruled cities were successfully taken by Amanirenas, who commanded a 30,000-man army from the front lines. However, Rome quickly responded by invading Kush, burning the Kingdom’s capital, and enslaving thousands of people. Negotiations to end the war started in 24 B.C. after years of ferocious fighting and significant casualties on both sides, and five years after the war’s start, a peace treaty was signed.

Although the hostilities ended in a stalemate, Queen Amanirenas—unlike many of her neighbors—was victorious in resisting conquest by Rome, never ceding large swaths of territory or paying taxes to the empire. Amanirenas is remembered throughout the Nile Valley and beyond as the Nubian queen who conquered the Romans.

Queen Nzinga Mbande was the ruler of the Mbundu people in what is now Angola and one of the African female warriors who commanded armies. She was a skilled politician and military strategist.

Portugal had created a colony close to Mbundu country to increase the slave trade in response to the rising need for slave labor. After her brother, the previous monarch, killed himself in 1626 due to growing Portuguese aggression, Nzinga was crowned queen. But prior to becoming queen, Nzinga met with the Portuguese to discuss peace negotiations at her brother’s request.

She established a strategic alliance with Portugal in 1622 due to her skill as a negotiator. Nzinga’s agreement with the Portuguese allowed her to fight enemy tribes to enslave for Portugal in exchange for weapons and an agreement that the Portuguese would stop committing slave raids on the Mbundu people. This was done in response to attacks from rival African aggressors looking to capture people for the slave trade.

However, Portugal had broken its agreement by the time Elizabeth was crowned queen in 1626. Nzinga resisted the Portuguese without quitting the fight. She led an army against the Portuguese in 1627 after forming a transient alliance with their adversaries, the Dutch.

Through her leadership, Nzinga successfully held off the Portuguese forces for decades, personally leading her troops into battle—even while in her sixties. Despite multiple attempts by the Portuguese to capture Nzinga, they never succeeded. She died peacefully in her 80s, after a long life of defending her people from colonial rule.

The Dahomey Amazons were an all-female military unit in the Kingdom of Dahomey, in modern-day Benin, and they were named after the race of female warriors from Greek mythology. They are among the most well-known African female warriors, and several movies have been created about them, including The Woman King.

The Amazons, who are thought to have come together in the middle or late 1600s, were renowned for their ferocity in battle and disregard for suffering, as well as for having significant sociopolitical control over their country. There were times when the Amazons worked with European colonialists to protect and enhance their own empire, trading captured adversaries from local conflicts for weapons and goods.

By the mid-1800s, they numbered between 1,000 to 6,000 women. When the French invaded Dahomey in 1892, the Amazons put up an aggressive resistance. Afterward, the French soldiers noted their “incredible courage and audacity” in combat, as cited by the African American Registry, an online consortium of Black history educators.

Fierce battling between the Amazons and Europeans continued, but the African female warriors were eventually outnumbered and outgunned and, within a few years, they were largely wiped-out.

While the Amazons were certainly powerful fighters, Leonard Wantchekon, a professor of politics and international affairs at Princeton University, argues it’s important to look beyond the shock value of their female warrior status when considering the Amazons’ legacy in history.

“The most important feature of the Amazons was not that they could kill like men,” says Wantchekon, a Benin native. “They were also regular people with regular lives, as well as well-respected cultural and political leaders in their communities.”

There is a widespread misconception that gender equity is a western value, adds Wantchekon, when in fact, European colonization was a detriment to women’s rights in Benin, where the French disassembled the Amazons and banned female education and political leadership.

“When we push back against this misconception and embrace the culture of gender equality that was thriving in Benin and places like it before colonization,” Wantchekon adds, “it is a way to embrace the legacy of this exceptional group of African female leaders that European history tried so hard to erase.”

The Jamaican Maroons, a group of formerly enslaved Africans who fought the British for their independence, were led by Queen Nanny.

Nanny was taken from Ghana as a child and sold into slavery in Jamaica. She escaped and sought safety in the island’s Blue Mountain region with other freed slaves. She rose to the position of commander of the Maroon community by 1720 as a result of her outstanding leadership and military abilities. She started guerilla warfare training for her populace that year.

As one of the very fearless African female warriors, over 800 slaves were freed thanks to Queen Nanny’s leadership of the Maroons in scores of victorious fights. Her astute tactics enabled the Maroons to ambush the highly armed British and annihilate their ranks.

By 1740, the British were forced to sign a peace treaty with the Maroons, guaranteeing their freedom. In 1975, the government of Jamaica declared Queen Nanny a National Heroine and awarded her the title of “Right Excellent” for her strength and courage. Her portrait appears on the $500 Jamaican dollar bill.

Yaa Asantewaa is also on our list of African women warriors. She presided over the Ashanti Empire, which is now in Ghana.

She ruled the affluent Ashanti Empire, also known as Asante, in what is now modern-day Ghana. The Golden Stool, the most precious item in the empire, was under her official protection as queen. The stool stood in for the imperial throne, which was made of solid gold and was said to house the nation’s soul. Asantewaa rejected British demands to hand over the holy artefact when they invaded in 1886. She instead commanded an army to fight them.

For months, starting in 1900, Asantewaa’s troops laid siege to the British occupying forces, who very nearly collapsed. Only after the British brought in several thousand additional troops and pounds of artillery were they able to defeat Asantewaa’s army. Asantewaa—who fought alongside her people until the very end—was captured and exiled to the Seychelles until her death in 1921. Her bravery and resistance in spite of the impossible odds have made her one of history’s most famous warrior queens to this day.