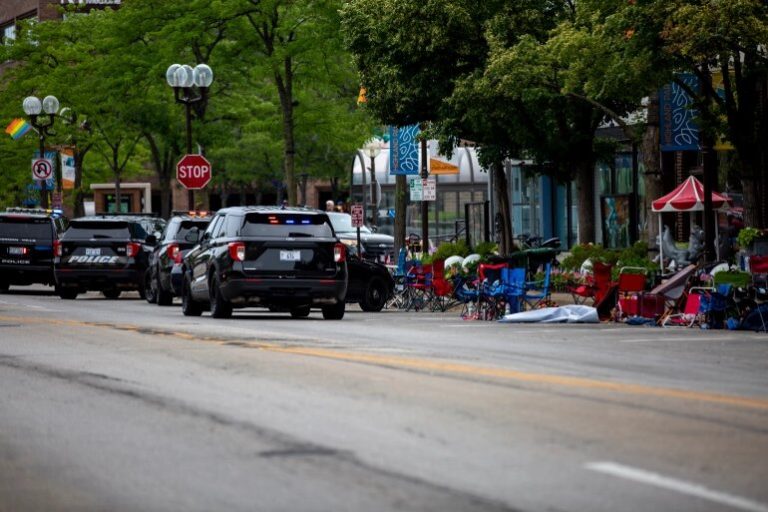 According to officials in the US city of Highland Park, at least six people were killed and two dozen others were injured in a shooting at an Independence Day parade in a Chicago suburb, as authorities continue to search for the suspect.

Officials said at a press conference on Monday afternoon that six people were killed, 24 were injured, and a rifle was recovered from the scene of the parade.

“Our community was terrorized by an act of violence that has shaken us to our core. Our hearts go out to the families of the victims during this devastating time,” Highland Park Mayor Nancy Rotering told reporters.

The incident commander on the scene, the city’s police commander Chris O’Neill, urged people to shelter in place. At the same time, authorities search for the suspect, described as a white male with long black hair, wearing a white or blue T-shirt and considered to be between the ages of 18 and 20.

“Law enforcement agencies are searching for the suspect; evidence of a firearm has been recovered. Numerous law enforcement officers are responding and have secured a perimeter around downtown Highland Park,” according to the city’s website.

The Highland park parade shooting which happens as the United States battles a surge in gun violence and after a string of recent deadly incidents, including a massacre at a Texas elementary school and a supermarket in Buffalo, prompted calls for stricter gun regulations.

The shooting in Highland Park, a community of about 30,000 people about 40 kilometers (25 miles) north of Chicago, sent hundreds of parade attendees fleeing, some visibly bloodied, and many leaving behind chairs, baby strollers, and blankets.

According to the Chicago Sun-Times, the parade began around 10 a.m. local time (15:00 GMT) but was abruptly halted 10 minutes later after shots were fired. Police told the people, “Everybody disperse, please. It is not safe to be here.”

Amarani Garcia, who was attending the parade with her young daughter, told a local ABC affiliate that she heard gunfire nearby, then a pause for what she assumed was reloading, and then more shots.

There were “people screaming and running. It was just really traumatizing”, Garcia said. “I was very terrified. I hid with my daughter actually in a little store. It just makes me feel like we’re not safe anymore.”

Debbie Glickman, a Highland Park resident, said she was on a parade float with coworkers and was about to turn onto the main route when she noticed people fleeing the area.

US Congressman Brad Schneider, whose district includes Highland Park, said he and his campaign team were gathered near the start of the parade when the shooting began.

“Hearing of loss of life and others injured,” Schneider wrote on Twitter. “My condolences to the family and loved ones; my prayers for the injured and for my community; and my commitment to do everything I can to make our children, our towns, our nation safer. Enough is enough!”

“I have been in contact with Mayor Rotering and have offered our support, and the Chicago Police Department is providing assistance. We grieve with the families of the deceased and injured as well as the entire Highland Park community,” she wrote on Twitter.

For decades, gun violence has been a problem in the United States, prompting condemnation and calls for gun control, particularly in the aftermath of mass shootings. Those calls have grown louder in the aftermath of a recent attack at Robb Elementary School in Uvalde, Texas, which killed 19 children and two teachers, as well as a racist shooting at a grocery store in Buffalo, New York, which killed ten Black people.

Late last month, US President Joe Biden signed the first major federal gun reform legislation in 30 years into law. Biden acknowledged on June 25 that the bipartisan compromise falls short of what is truly required, but he stated that it will “save lives.”

The bill includes provisions to toughen background checks for the youngest gun buyers, keep firearms out of the hands of more domestic violence offenders, and assist states in enacting red-flag laws that make it easier for authorities to seize weapons from dangerous people.

In a statement released Monday afternoon about the Highland Park parade attack, Biden expressed shock at “the senseless gun violence that has yet again brought grief to an American community on this Independence Day“

He promised to help the community and said federal authorities were assisting in the hunt for the shooter. “I recently signed the first major bipartisan gun reform legislation in almost thirty years into law, which includes actions that will save lives. But there is much more work to do, and I’m not going to give up fighting the epidemic of gun violence,” Biden said.

According to the Gun Violence Archive, a United States non-profit that defines a mass shooting as any incident in which four or more people are shot or killed, not including the attacker, the United States has seen 308 mass shootings this year.