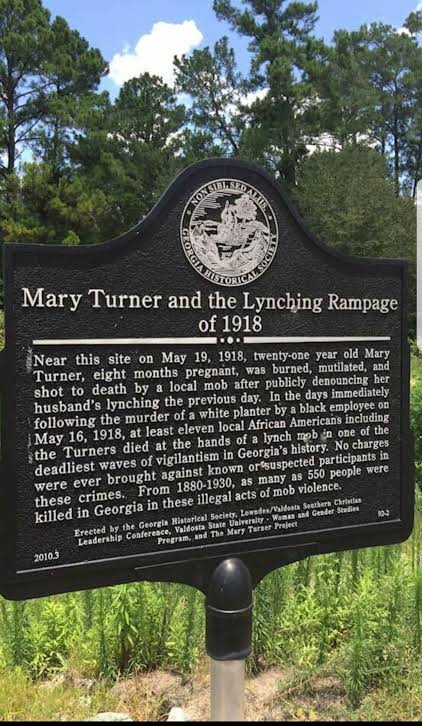 One of the many gruesome killings of black people, is the story of Mary Turner.

In May of 1918, Hampton Smith, a 31 year old White plantation owner in Brooks County, Georgia; was shot and killed by one of his Black workers named Sydney Johnson. Hampton Smith was known for abusing and beating his workers to the point few people in the area would work for him. To solve this labor shortage, Smith turned to the debt peonage system of the day and found a ready labor pool. He used that system by bailing people out of jail, people typically arrested for petty offenses;  who would then work off their debt to him on his plantation. Nineteen year old Sydney Johnson, arrested for “rolling dice” and fined thirty dollars, was one such person.

After a few days of work on Smith’s plantation, and shortly after being beaten by Smith for not working while he was sick; Sidney Johnson shot and killed Hampton Smith. What ensued after the shooting was a mob driven manhunt for Johnson and others thought to be involved in his decision to kill Hampton Smith. That manhunt lasted for more than a week and resulted in the deaths of at least 13 people; with some historical accounts suggesting a higher number of persons killed. One of the people killed was a woman named Mary Turner. 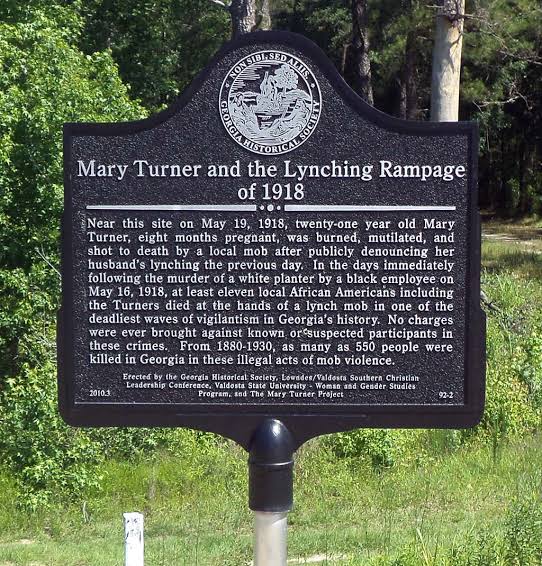 Twenty year-old Mary Turner, 8 months pregnant at the time and whose husband had been killed in this “lynching rampage” on Sunday, May 19th; made the mistake of publicly objecting to her husband’s murder. She also had the audacity to threaten to swear out warrants for those responsible. Those “unwise remarks,” as the area papers put it, enraged locals. Consequently, Mary Turner fled for her life only to be caught and taken to a place called Folsom’s Bridge on the Brooks and Lowndes Counties’ shared border.

To punish her, at Folsom’s Bridge the mob tied Mary Turner by her ankles; hung her upside down from a tree, poured gasoline on her and burned off her clothes. One member of the mob then cut her stomach open and her unborn child dropped to the ground where it was reportedly stomped on and crushed. Her body was then riddled with gunfire from the mob. Later that night she and her baby were buried ten feet away from where they were murdered. The makeshift grave was marked with only a “whiskey bottle” with a “cigar” stuffed in its neck.

Three days after the murder of Mary Turner and her baby, three more bodies were found in the area; and Sydney Johnson was killed in a shoot out with police on South Troup Street in Valdosta, Georgia. Once killed, the crowd of more than 700 people cut off his genitals and threw them into the street. A rope was then tied to his neck and he was drug to Campground Church in Morven, Georgia, 16 miles away. There, what remained of his body was burned. During and shortly after this chain of events, it is reported that more than 500 people fled Lowndes and Brooks Counties in fear for their lives.