A traditional wedding in Kenya adopted the theme of the famous Netflix series, Squid game. Photos and a video of a Squid Game-themed traditional wedding ceremony, known as a ngurario, began circulating on Kenyan social media. In the photos, young women line up waiting for the groom to identify his bride while wearing the famed Squid Game masks, including the square, circle, triangle, and full-black imagery. They also wore varied traditional attire, as is customary during such events in Kenya. 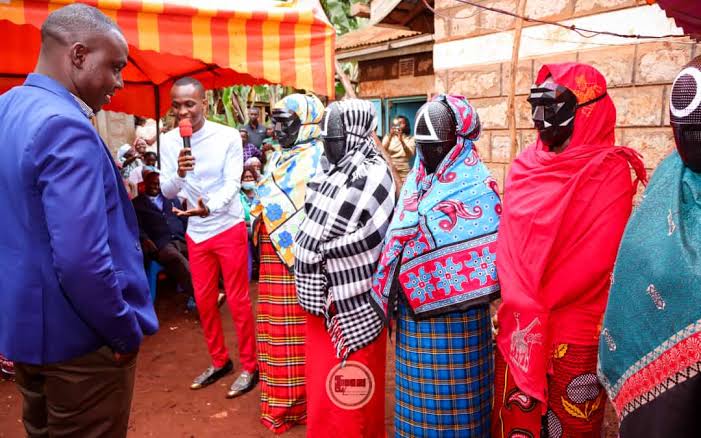 In the Agikuyu traditions, ladies of the same size as the bride are covered from head to toe, and the man is given the hard task of identifying his bride. Failure to identify the right woman leads to a hefty fine to be paid on the spot.

Originating from the Gĩkũyũ/Kikuyu community of central Kenya, the ceremony is the final part of the numerous Kikuyu Dowry and marriage ceremonies where the groom is expected to gũcagũra mũka; to identify his bride from a group of women whose identities have been deliberately concealed.

The women who are often friends, siblings, or cousins of the bride; are wrapped from head to toe with khangas (wrappers) and presented in groups go the groom and the congregation.

The groom proceeds to uncover his wife by removing the head wrapping. When he identifies his bride, the ceremony is marked with loud jubilation. If he picks someone other than his bride, he will be penalized in the form of a cash payment to the bride’s family. If stuck, he may request the assistance of his best man.

Wedding Master of ceremony, Antony Gitau alias Mc Tony, who had taken and shared the video online, told Citizen Digital; a that he thought the masks each woman wore were especially symbolic. In the show, the circle, square, and triangular shapes each demonstrated the ranking of the guards. The bride aptly wore a squid game mask with a triangle on Saturday; and according to Gitau, this was a symbol that she is always present, round the clock.

You see, from the show, you could tell the ranks and hierarchy of the guards based on the masks they wore.

Workers with square shapes oversee the other workers and the players. The triangle shape masks are traditionally the protectors/enforcers and armed with weapons.

For a Citizen Digital reporter;“We are just happy that the groom was not shot to death in case he picked the wrong girl in front of her parents and elders.”