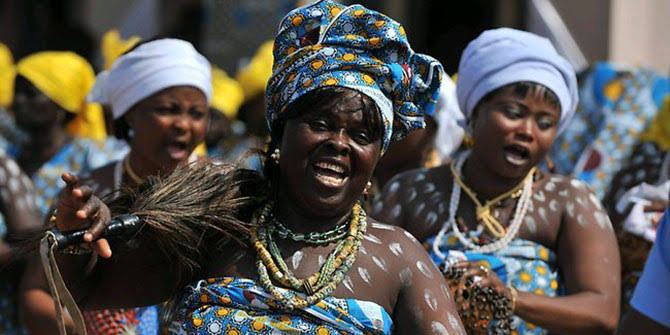 The adoption of the sugar plantation model used by the Portuguese in Brazil marked; the beginning of the influence of African culture on the people of the Caribbean. It has been estimated that between 1650 and 1850 over 12 million African slaves were brought into the Caribbean. Slavery definitely made a mark on slaves and their descendants which is still part of their consciousness today.

After the abolition of slavery several nations faced the challenge of reconciling blacks and non-blacks in the same system, especially how to integrate African culture into national identity. Prior to the abolition of slavery, Africans were forced to abandon their languages, religions, dressing, and so on. This was aimed at erasing any form cultural links they had with their home continent.

Despite the challenges faced in maintaining cultural ties with Africa, some parts of African culture, especially music and religion miraculously survived. Some of the religions which are still in existence till date are Vodou of Haiti and Santeria of Puerto Rico and Cuba. Most of the music and dance that survived had been fused with European styles to produce new genres entirely. The new styles which evolved include chacha, merengue, reggaeton, son, calypso, etc.

Another aspect of African culture that was not completely erased was the African dishes. This was basically because most of the food cooked at the period was by African slaves. This meant they were able to fuse African and European dishes and cooking methods. It can be noted that African food and music had a great impact on American and European styles.

As much African slaves faced hostility and brutal treatment to ensure that they let go of their cultural heritage; most of the African culture survived because of resilience and innovation. The African-Caribbean people were in particular able to maintain their African culture sometimes by fighting for the cause. A very important example of this is the Dominican Republic gaining independence from Haiti, where the first successful rebellion of slaves took place at St. Domingue.

The people of Dominican Republic started a struggle to gain independence from Haiti because the later exhibited a denial of African cultural heritage. In more recent times however several efforts were made, mostly by artists to reignite African culture among the Africans in diaspora. Some of the great poets like Nicolás Guillen from Cuba Luis Palés Matos from Puerto Rico, Aimé Césaire of Martinique and León Damas of Guyana. They also used storytelling to preserve African culture, telling the younger generation of the culture of their fathers.

The movement for the preservation of African culture later became political with the establishment of Universal Negro Improvement Association (UNIA) by Garvey in 1914. This led to a series of events which are still being upheld today by African-Caribbean people in preserving African culture.

Language is certainly an area where African retention is strongest; Jamaican patois was born from the intermixing of African slaves and English, Irish, Welsh, Scottish sailors; enslaved Africans, servants, soldiers and merchants. The enslaved African spoke many dialects, and given the need for a common tongue; Jamaican patois and several other Caribbean Creole language was born.

Many festivals amongst the slaves, involved recreational, ceremonial and functional use of music and dance. “Slaves,” Brathwaite explains, “danced and sang at work, at play, at worship, from fear, from sorrow from joy”. They recreated African musical instruments from materials found in Jamaica (calabash, conch, bamboo, etc.) and featured improvisation in song and dance.

All of these customs and many more such as the Christmas street parades of Jonkonnu; were misunderstood and undervalued by Europeans with the exception of the political use of drumming; to send coded messages from plantation to plantation. Drumming of any kind was therefore often banned. Jamaican music today has emerged from the traditional musical forms of work songs sung by slaves, the ceremonial music used in religious services and the social and recreational music played on holidays and during leisure time. These festivals and activities still carry on till this day.

According to Chinua Achebe, Proverbs are the palm oil with which words are eaten. In Africa, a conversation will not be complete without the use of Proverbs. Most Carribean proves are born out of the influence of African slaves.

THE INFLUENCE OF THE AFRICAN AMERICAN POP CULTURE IN THE WORLD