An Archeological Analysis Of How Black People Created The First Caucasians

According to L.A.W, The common knowledge that all men were made from Adam and Eve and that the world started in the garden of Eden is completely false. Humans have lived on earth for thousands of years, and the first humans were Black people.

Blacks were the original humans, and from the Black man came the first white man. The History of humanity cannot be told completely without first exposing this very important aspect of human growth and survival.

There was a study carried out in 2015 at the University of Harvard, and it showed to a great extent that white people are a product of the original black humans. The results of their findings were made possible by their reliance on ancient European’s modern human fossils and remains. In this article, we will itemize and discuss the various areas that were researched and results that prove that white people came from Black people.

Although the world has been calculated to be 13 billion years old, scientists have said that smaller mammals and Dinosaurs populated the earth and held sway around 65 million years ago. The mammals comprised of chimpanzees and they were the first of the hominid species. They were called the Tumai. Their fossils were dug up in Chad and are dated to be 7 million years old. The other species of humans to follow were due to evolution, and they were the Homo Erectus, Homo habilis, Homo Naledi, and Homo Rhedesiensis.

Our current species of humans started to evolve around 200,000 years ago in East Africa, as purely black people. This fact was reached by the difference in the skull sizes and characteristics of modern humans and the Neandertals. A human fossil from the Omo 1 site in Ethiopia dating 195,000 years old; clearly shows the beginning of the skull change and the start of the modern human era; with a rounded skull case and projecting chin.

Another skull that was dug up at a site in the Middle Awash area of Ethiopia was 160,000 years old; and showed an early transition from the Tumai to the Omo 1. The skull had a rounded skull but retained the large brow ridges of archaic humans. Also, another more transitioned form of the first black people was found at Laetoli; in Tanzania which dated to about 120,000 years ago.

The first Black homo sapiens started to leave parts of Africa around 70,000 years ago, into East Asia’s lower latitudes. And around 46,000 – 60,000 years ago, another wave of Black Hmo sapiens migrate from the South-East of Asia to Australia. These were the Aborigines of Australia, and they most likely came to Australia by small boats or rafts.

The first modern humans arrived at the Japanese Islands around 30,000 years; and another wave moved into Northeastern Siberia by 35,000 – 30,000 years ago. Some of those who migrated to Siberia later moved to North America through the Bering Plain. 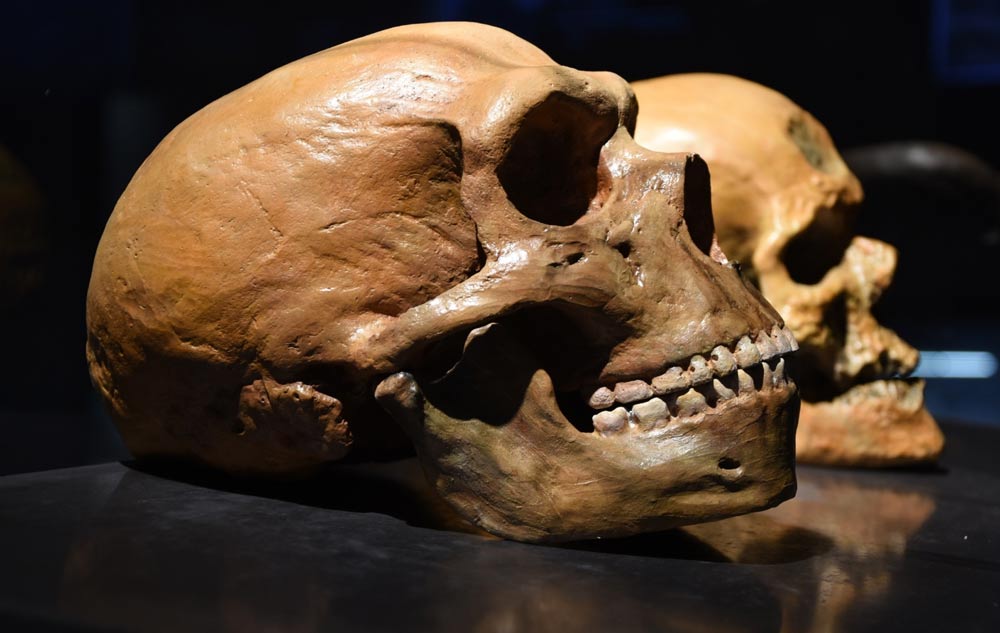 These first waves of humans were entirely Black and the world remained that way for thousands of years. The first light-skinned people were birthed around 7,700 years ago and they comprised Europeans, Arabs, Asians and other variants of light-skinned people.

Black people populated the whole of Luxemburg, Hungary, and Spain at around 8,500 years ago. The Original Eurasians who were the first Africans to arrive in Europe 7,800 years ago; from Western Asia, spread two genes in Europe. The genes are SLC24A5 and SLC45A2, which are responsible for the skin color of the white man.

The initial population of the Scandinavian region started around 7,700 years ago and was colder than in other regions of Europe. The initial white-skinned humans in Scandinavia carried the HERC2/OCA2 gene that is characterized by blue eyes, blond hair and white skin. The Scandinavian weather and climate supported the growth and long life of the white skin and gene, and so they multiplied more as against the black skin. The process is what science calls ‘Natural selection’, and it led to the complete whitening of Europe around 5,800 years ago.

Studies show that the three above mentioned genes are “albinism genes”, and are found in and originated from Africa. The OCA gene simply stands for OculoCutaneous Albinism; and further shows that nature chose to uphold and spread albinism in Europe; as a result of environmental constraints. And this then means that albinism; (which is the state of the white man’s skin) is originally an African trait.

As was stated above, the albinism in Europe is strongly related to blond hair color, as it is in Africa. Also, there are traces of people with red hair in Africa, who are not products of race-mixing; as is the case with Africans with freckles. So European hair diversity is not originally a European phenomenon, but African. This diversity of hair color is a function of the original genes from Africa; which then later showed up in the European white population.

The same above mentioned phenomenon can be used to give an account of the green and blue eyes of Europeans. These eye colors are originally Africa and have spread among the white Europeans through the OCA2 gene.

Straight hair among blacks and whites are more of a function of the climate than of genes. The heavy sunshine in Africa made the Africans grow spirally shaped hair to protect the head from excessive heat, while the cold temperature of Europe, made the European hair to grow down and cover the external respiratory organs from cold and diseases.

But the facts remain that there are black people all over the world, with straight hair. The Greeks in the description of the black people of ancient Sudan made mention of Black people with long and straight hair. Today, they are found in India and also in Africa, among the Fulani people. So it is obvious that the straight hair of Europeans was formed; due to weather conditions during the time of their mutation.

Studies show that long and narrow nostrils do a better job at heating up the air that goes into the lungs in cold weather; while short and broad nose does not. It is sufficient to note that the original blacks who reached Europe first were faced with respiratory diseases due to a large inflow of cold air; and this condition was solved by nature, by changing the nose of those in Europe to thin and narrow noses.

The Rwandans, Somali, Fulani and Black Indians (Dravidians) are a few among the Black tribes that have this skull type and thin face. Therefore it is most definite that the European facial feature is originally African.

All the features of the white man are predominantly and originally found in Africa; and it then means that their features are a recombination of the features of various variants of the black human in Africa.

Mixtures of Caucasians And Black People

When the white human from northern Eurasia arrived in the Middle-East around 5,000 years ago; they met the black human there and both colors mixed. Their mixture gave birth to the Semitic White people. The Akkadians in Iraq were the initial Semitic white, as stated by Cheikh Anta Diop. And so, by record and findings, all the Semitic Whites; are a product of the encounter between Black and White people.

The Arabs of today were produced from a mixture of Whites and Original Blacks from Arabia which are known as Sabeans. While those from Palestine, Lebanon, the Hebrews, and Syrians; are a product of the mixture between White and Canaanites-Phoenician Blacks who occupied the Near East.

The White Berbers of today are only about 1,000 years old and are a product of White European slaves; and Black Berbers who were Originally from the Maghreb area in Africa.

Furthermore, there are other races of white people whose origins are important to note. Some of them are the Amerindians who are a product of Asians who migrated to America around 5,000 years ago; and the blacks who were originally from the Americas.

The Latinos of today were given birth to from the coming together of Europea colonizers and Amerindians; this race of Latinos is only about 500 years old.

There is a record of white people who are referred to as the “Mediterranean type”; and are a product of the mixture between Whites and the Black Civilizers of Europe.

The first wave was the Egyptian around 3,500 years ago, at the dawn of the Greco-Roman civilization; which consisted of Blacks from the Near East (Phoenicians) on one hand and through Italy’s Blacks called Etruscans on another hand.

The second wave was around 1,300 years by the Black Berbers from Maghreb (Moors or Saracens). These Africans infiltrated the south of Europe to the point that to date; their population still poses strong black features.

This is how the human race as we know it today came to spread throughout the earth. And it is most important to know that the origin was Africa and that the first color was black; with white color being a product of climate adaptation and mutation.